Sony announced its newest Xperia Pro, the world’s first external 4K HDR OLED Monitor, and the live streaming and file transfer solution 5G (mmWave) for your dedicated camera. Sony has equipped the device with four 5G antennas, a retrofit chassis, and the addition of a Micro HDMI port to support these new capabilities. It is intended for professionals, creatives, and creators of content who have to be delivered from as varied a range of locations as soon as possible, if not in real-time.

Related: 20 Best Features of 5G Mobile Phones: You Must Know

Although most hardware remains the same as the Xperia 1 Mark II, the inclusion of the HDMI port means that the world’s first portable 4K1 HDR OLED monitor is coming with the support of a wide array of formats for cameras and video production devices. The Xperia Pro is an intriguing feature combined with a few unique features and others which you can’t simply see together on one device.

We wouldn’t like to mention the camera features of the Xperia Pro at first. Like the rest of the telephone – e.g. the unchanged but rather capable display – the features of the camera remain the same as the Xperia 1 Mark II. Pro uses Alpha 9 cameras’ technology to reach headline capturers like real-time autofocus of humans and animals and 20 fps bursts with uncompromised AF and auto exposure (AE) velocity per frame.

This approach to the Next Level is taken by the Xperia Pro. The iPhone 12 Pro Max or the Galaxy’s S21 Ultra is not meant to compete with. Actually, there’s not really another device like that that has the same features.

The Sony Xperia Pro 5G is turned into a set of professional photographer tools, video shooters, and content creators with its 5,5-inch 4K displays, 5G connectivity, and HDMI input. And it may still be not exactly for you, even if you are one of those people. 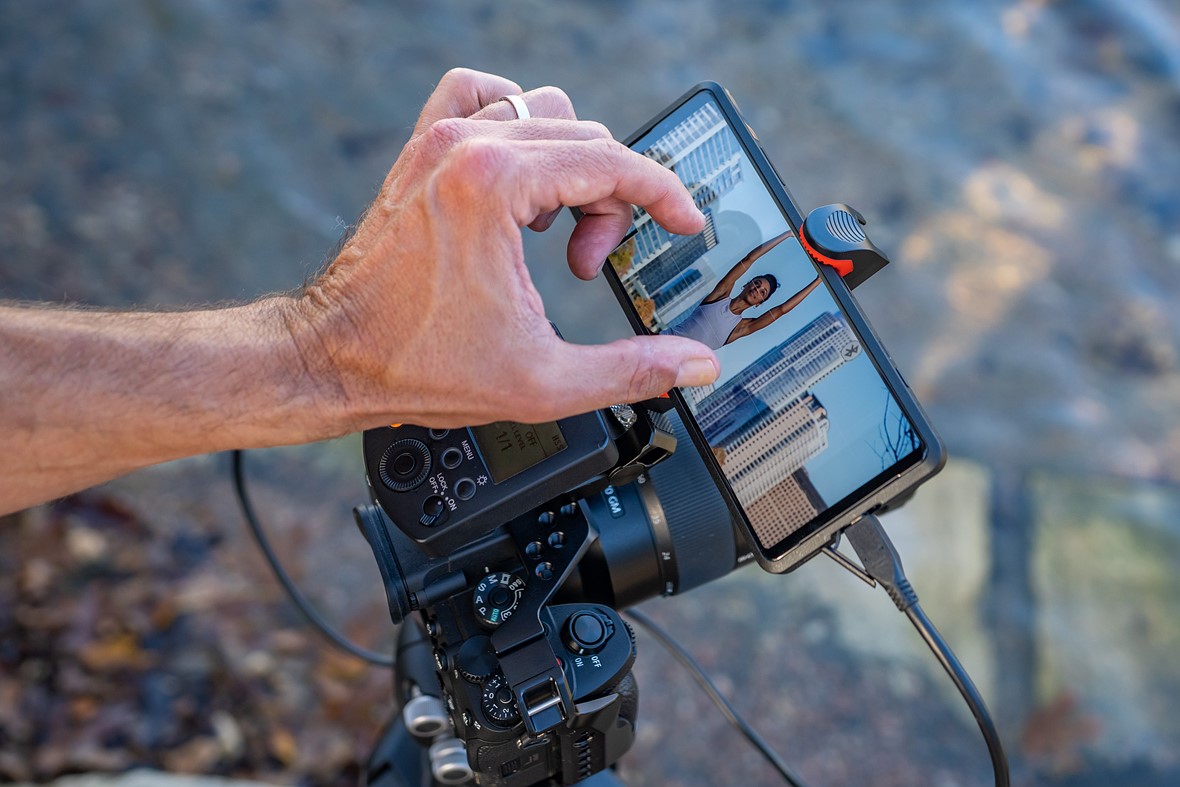 Sony Xperia Pro 5G can be used in stills and video capture using dedicated cameras as a high resolution 4K HDR external monitor. The high end OLED display provides a clear, high-contrast, broad color gamut that is well above the LCD or OLED display found in cameras that are mirrorless. For precise focusing adjustments as shown above, the large display can be used in combination with pinch and zoom.

The Sony Xperia Pro 5G can be used both as a video monitor and as a video streaming device when it is connected to a supported camera through Micro HDMI. As a monitor, it offers a 6.5″ 4K true HDR screen (thanks to its OLED panel) and Pinch-to-Zoom feature to ensure a precise focal point adaptation and can also transmit 4K video up to a maximum of 131Mbps as a 4K live streaming device – no words yet on battery life while ongoing live streaming. 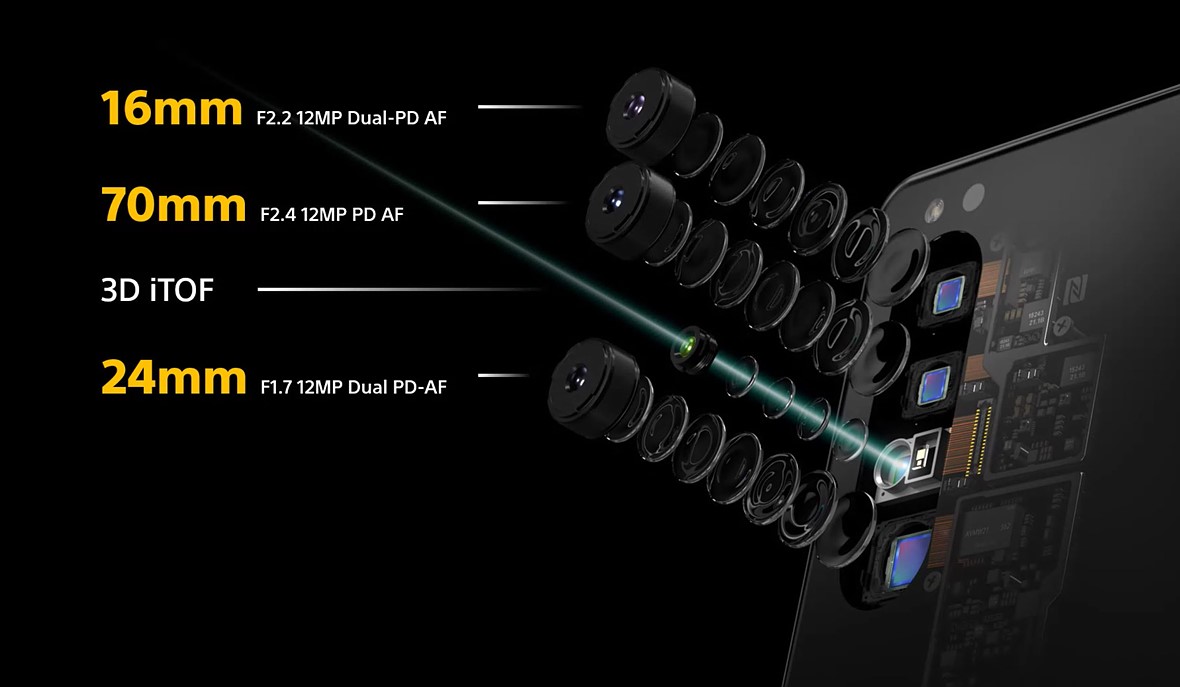 The Xperia Pro uses its camera array and Xperia 1 Mark II features to demonstrate the technology of the Alpha 9 cameras of the company. The following diagram divides the three main optical modules and lens designs and the flying time module.

Initially labeled as Xperia 1 Mark II, a 3D time-of-flight (ToF) camera helps improve autofocus performance, especially under low light conditions. The iTOF camera sends IR light in grid form – 43,200 points – and measures the length of time it takes to return to the camera after nearby objects are bounced. It is up to five meters operational distance, beyond which items are simply as infinitely measured. In order to speed up focus acquisition, iTOF measurements are combined with dual-pixel measures and PDAF. There is no word on whether the ToF camera is being used or not to upgrade the map of depth generated in bokeh mode by the double pixel sensor.

Xperia Pro can also be used to transmit photos or videos4 via 5G to an FTP server or to another website using the USB-C port of the phone connected to the supported Sony camera.

On the video capture front, Xperia Pro offers 21:9 24/25/60p 4K HDR modes, both for capturing HDR video by shooting and using HEVC, and 10-bit encoding in BT.2020’s wide color space by combining different exposures per output frame. You can tap your subject in the autofocus of the video in order to focus on it, but we still have to confirm if face or subject tracking is via a simple ‘tap-to-track’ interface, as it is on recent Alpha Series cameras.

Sony has maintained the xperia 1 Mark II headphone jack with 3.5 mm as well as two stereo speakers and playback from Dolby Atmos. Sony claims the same signal, which is that Xperia 1 Mark II won over the Mark I, improves its sound ratio (a ten-fold reduction in noise). A smart wind filter uses noise cancelation technology taken from Sony’s headphone division to digitally remove rumbling and wind noise. The phone is also 360-degree reality audio support.

The integrated network display application can help you determine the best way to place your telephon for a broadcast to find the strongest 5G connection. The practical look of the Xperia Pro is one of the reasons why it has four different 5G antennas. The app shows uploading and downloading speed and which side of the phone has the strongest 5G signal (top, bottom, left or right). The thought is that you’d move your phone to the strongest side.

Sony Xperia Pro 5G is supported with USB-C tethering in the file transfer protocol or ftp. This was Sony’s first feature on Xperia 5 II and Sony A7SIII launched last year for quick photo file transfers. However, you could have faster speeds with the addition of 5G, in theory.

Sony partnered with Verizon Wireless for the launch, but the telephone will also be released. When writing, the Xperia Pro is used on other carriers, only 4G support is provided.

The launch price is $2500  and handsets will be available for purchase from today.

How to Fix WhatsApp Voice Message Volume Problem on iPhone

How to Secure Against the Serious Threats of the Metaverse

How to clear your browser cache in Chrome, Safari, Firefox, and Edge

Top 5 Writing Tools That Every Learner Should Use In 2022

How to Add Water Eject Shortcut on iPhone

How to Fix WhatsApp Voice Message Volume Problem on iPhone

How to Secure Against the Serious Threats of the Metaverse

How to clear your browser cache in Chrome, Safari, Firefox,…

How to Fix Apple ID Verification Failed on iPhone