Blockchain Can Be The Key To End Banking Corruption

The banking institutions were created primarily to provide a reliable intermediary between two parties, as a borrower and a lender. Legitimate trade required the use of an institutional bank. While banks have moved away from their origins in the old empires, their basic business operations have not changed.

Traditional banks and financial institutions have played an important role in facilitating payments and remittances. A remittance payment is a transfer of funds by a foreign worker to an individual in their country of origin and, often, is of great economic importance to their beneficiary. The remittance payments compete with international assistance as one of the largest sources of income in developing countries.

Those who have not yet become familiar with the remittance industry may be surprised to discover its relevance and function as a multi-billion dollar market. Remittances to low and middle income countries recovered to a record level of 466 billion dollars in 2017, an increase of 8.5%, after a decline of two consecutive years, according to the  World Bank. Remittances, which include transfers to high-income countries, totaled 613 billion dollars in 2017, marking an increase of 7% from 573 billion in 2016. Factors such as stricter immigration policies may have resulted in an increase in the amount of remittance payments this year, and the 2018 figures are expected to increase accordingly. 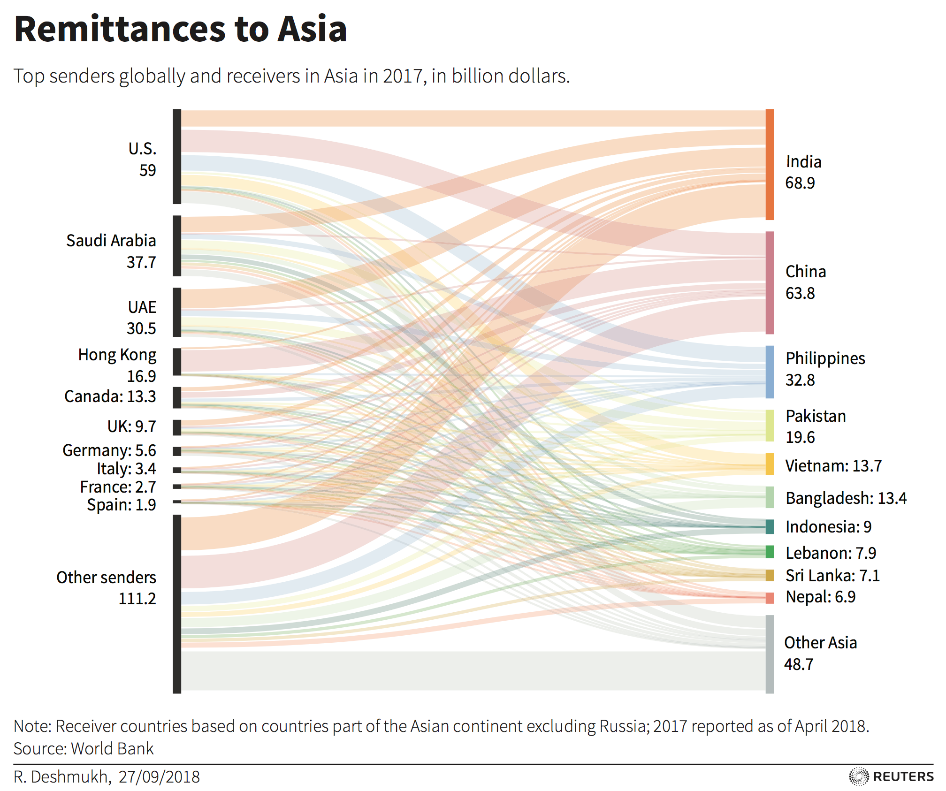 In addition to traditional financial institutions, cross-border transfers have long been dominated by companies such as Western Union. Remittances are directed to the needs of less developed countries, rather than to the western world. This is reflected in the statistics that show that  the countries that  received the most important remittances in 2017 were: Kyrgyzstan (35%), Tonga (33%), Tajikistan (31%), Haiti (29%) and Nepal (29%). , percentages calculated as a part of the GDP.

In many of these developing countries, a high percentage of the population does not have access to bank accounts. They are forced to use money transfer operators. Due to the challenges they present, many have asked for a solution to revolutionize the process for the “unbanked”, and to achieve an inclusive financial environment without corruption.

Corruption as the main act in banking operations

You can use your WhatsApp account on multiple mobile devices: report

The corruption has played a leading role in the history of financial institutions. Attacking corruption remains a major concern for regulatory agencies, financial regulators and the general public. Due to the interrelated nature of the financial sector with the government, corruption has systemic complications that threaten economies on a national and international scale.

There are compliance frameworks to combat corruption, but governance in banking varies enormously globally. The purpose of the banks is to act as safeguards to determine and monitor possible illegal activities, such as money laundering. There is a great responsibility on the shoulders of employees to identify and report suspicious transactions, hackers, privileged information and criminal activities. The transforming nature of the sector has resulted in an increase in incidents, such as hacking, which has directly impacted fraud and corruption, which has caused internal structures to no longer be completely reliable.

Enthusiasts of cryptocurrencies and blockchains have highlighted the opportunity to take advantage of technology to transform the banking and remittance sector. A corruption scandal like  the case of 1MDB , which involves one of the most prominent financial institutions, could have been avoided by the use of blockchain technology. In fact, the near impenetrability of the blockchain offers a solution to corruption, since no government can add or withdraw cash from circulation. So, how can the chain of blocks transform the remittance process and eliminate corruption?

How can blockchain technology alter the remittance industry

Until recently, the only two ways to transfer money abroad were to move money from one bank account to another or use private transfer services. None of these options provides security or is totally efficient. However, the global remittance market is undergoing a fundamental change. Blockchain technology has the greatest potential to revolutionize and solve problems within the payment system, including high commissions, slow transactions and the number of intermediaries.

While increased competition has caused a slight decrease in transaction costs over the years, expenses and commissions for the exchange rates that favor the bank or the bank transfer service are still charged, and They differ a lot from the origin to the destination. Blockchain technology facilitates the reduction of commissions and provides more profitable transfers, since it eliminates the overhead associated with intermediaries.

Traditional financial services charge 7.4%. Blockchain technology can potentially reduce fees to less than 3%, as is the case with a test that was recently conducted in Serbia. The use of traditional banking services, the process of sending remittances may take several days, and expenses are charged every step of the way. If the banks could be eliminated from the process, the costs would be further reduced.

While still in its early stages, the global banking system can only benefit from the introduction of blockchain technology in its services. Its anti-corruption features will save billions from both the public and financial institutions, while introducing greater accountability into the system and effectively controlling corruption. The chain of blocks will allow more people to access money and bring them closer to financial inclusion.

You can use your WhatsApp account on multiple mobile devices: report

OnePlus 8 and OnePlus 8 Lite: Price, launch and all the rumors

How to find the right VPN for working remotely

Hitman Pro vs Malwarebytes What is the Best Anti Malware?

How to Clean Offices, Workspaces, and Homes Against Coronavirus

You can use your WhatsApp account on multiple mobile…

OnePlus 8 and OnePlus 8 Lite: Price, launch and all the…

How to find the right VPN for working remotely

Hitman Pro vs Malwarebytes What is the Best Anti Malware?

How to Clean Offices, Workspaces, and Homes Against…